Plaster Casts with a Message 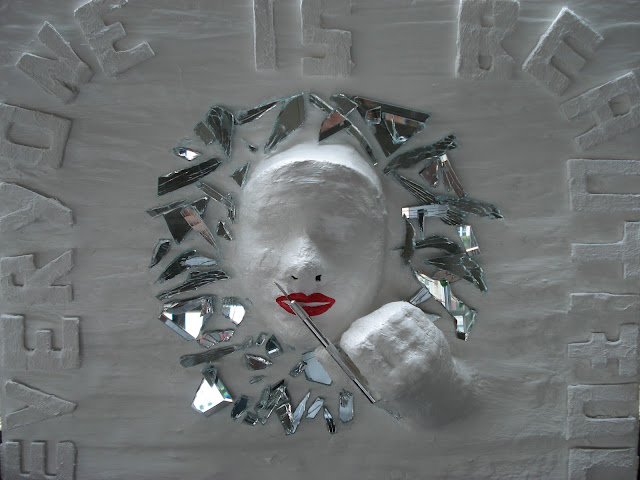 This was a plaster project inspired by the work of Amercian artist George Segal and his life-size plaster body casts. I began the project by showing my grade 9/10 class a slideshow of his works. Point out and discuss the lack of colour and the feelings the sculptures evoke.
Students had the choice of working individually or in pairs. Most chose to work in pairs. I tell them beforehand that I grade them as a group, so they are aware that they each need to pull their own weight and equally distribute the work.
For this project, students need to think of a message or idea or feeling they want to express through their sculpture. They should plan all this out in their sketchbooks the class before, because you need a full class (ours was 80 minutes) to create the plaster cast. They can cast their hand, hand and arm, a face mask, or a combination of all. I use a student volunteer and show how to create a cast of a hand. Pre-cut a bunch of strips first, and then have a container of room temperature water ready. WARNING: this is a messy project.  Luckily, though, plaster doesn't stain or ruin clothing. It just takes forever to wipe off the tables. We lay down newspapers, but the plaster dust inevitably gets everywhere including the floor.
To prevent sticking, you can wrap the hand/arm in plastic wrap. Spread on some lotion or petroleum jelly on the skin first to help the plastic really stick. For the plaster rolls, I've been told by another art teacher that you can buy them cheaper from a medical supply company as opposed to ordering them from an art catalog.  Good to know. 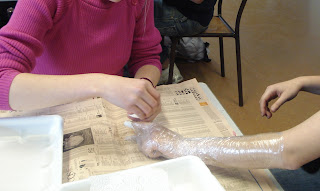 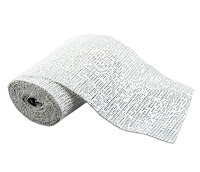 Have your plaster strips cut and ready to go. You don't want to have to be cutting more mid-way through when your hands are all wet and messy.
Of course, you inevitably get those students who say "I don't need to use plastic wrap; I'm going to do it directly on my skin." Ok- well then go for it, I always say, then watch with glee when they stuggle to remove the cast! Mwuahahaha! Actually, you can do it this way without much incidence as long as you cover all the skin with a thick layer of petroleum jelly. And I've never once had a student have an allergic reaction to the plaster. I keep hand lotion in the room for everyone to use because your skin gets really dry from the plaster.
﻿ 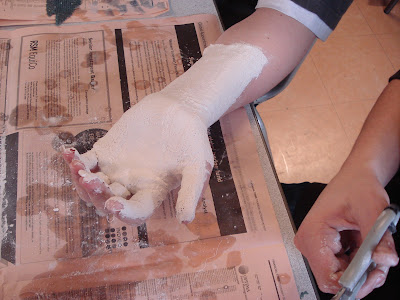 Do two-three layers of plaster, smoothing as you go along. A paint brush helps with this. Let sit to harden (10 minutes or so) and then carefully remove the cast. Some students wrapped their entire hand and then had to carefully use scissors to remove it. I found I really didn't have to help them much- it was very much a 'figure it out as you go along' type of project. The students did quite well constructing these and fixing any problems they encountered. Any fingers that were loose or broke off just had to be re-attached with more plaster.
Once the cast is off the hand and still somewhat damp, students can further smooth it out and add bit of plaster to any thin areas. You don't want to do this the next class when the cast is bone dry, though, as new plaster doesn't stick that well to old plaster.
For the faces, we used plastic multicultural face molds that I ordered from Dick Blick here.
They're quite small; I wish they would make them bigger.
Once the casts were made, students created their bases out of scrap cardboard and foam core. The foam core seemed to work better and warped less. Plaster over the entire base and either plaster on the casts or hot glue them. Once dry, students could leave their sculpture white or add a bit of colour with acrylic paint. Some students added extra accessories to further their message. Finally, students needed to write an artist statement and a reflection about the entire process.
Here are some of the Grade 9/10 results. I was really happy with the variety of messages the students thought of, and they all reflected their personalities.
Most of these are ESL/EAL students- having English as their second or third language.
"I mainly wanted to express the values of love and of communication through my art.
To achieve this, I decided to emphasize ‘love’ by painting the heart in red, making it stand out to the viewer’s eye. And to depict ‘communication’ I chose to write a famous quote by William Shakespeare, “Now join your hands, and with your hands, your hearts.” 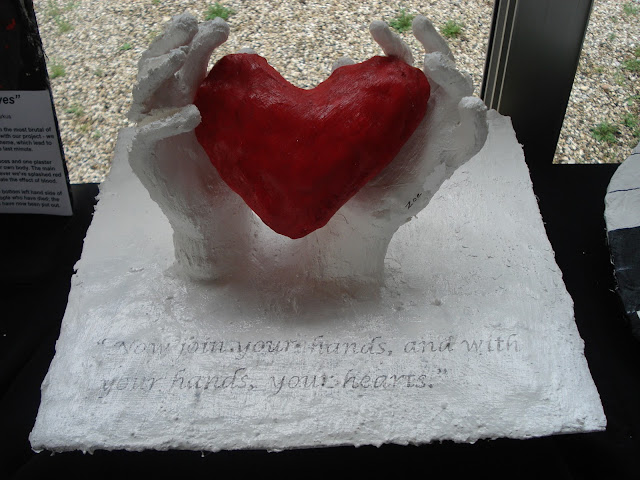 "We decided to make two plaster hands, to show that friends are always there for us even when we are not there with them. One hand is protecting the other one. The background is a wall corresponding to the quote we wrote.
We had problems with the plaster and paint holding on the project (it kept peeling off), so we had to repaint it a few times. Finally we switched to acrylic paint; it worked much better and we were done!
We didn’t have any problems working as a team, as we had the same ideas, and both of us knew what we were going to do. We enjoyed working with the plaster." 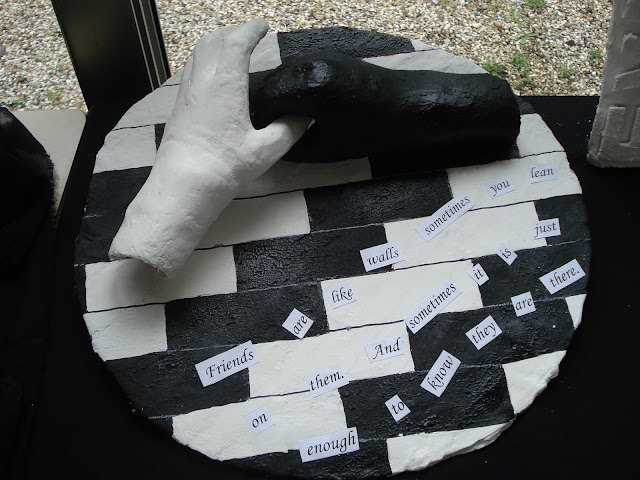 "I wanted to do something to represent friendship. I got to think about a poem about friendship. I wanted to use the poem on my art, so I used a flower as a background with a face in the middle to represent the remaining flower. The poem I used I found on internet a few years ago; it is a Swedish poem so I had to translate it.
It took a long time to write the poem on the plaster, but it was a fun project and I am happy with the result." 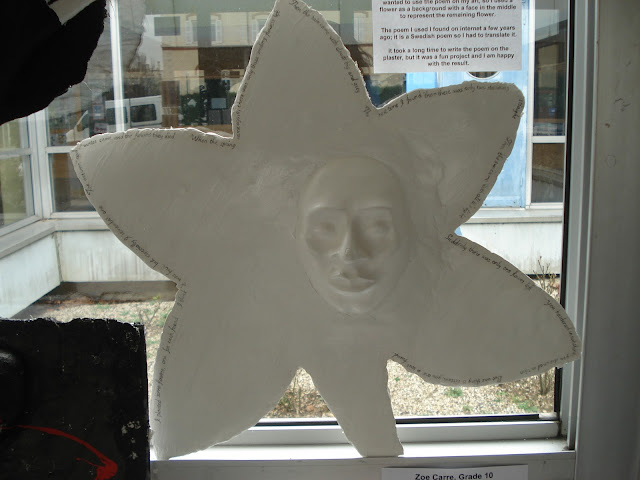 "Ring, Ring, Ring, Ring, Staple Phone"
"This piece of art is a stereotypical view on today’s modern society. People today often do things without thinking, which is depicted in this artwork.
Some challenges we faced were removing the plaster cast from the staple gun.
Another problem we faced was that fingers from the hand cast fell off. We had to re-attach them in the end."
"Time…Is not on our side…"
"This piece expresses how we are all racing against the clock. The way it is chipped and not overly refined gives the illusion that it has been running since the beginning of time, while the face in the middle just gives it the vibe of mystery. There were many difficulties that I faced in making this clock. One of the first was getting a board big enough for what I needed to do. The huge board took FOREVER to plaster, and then warped afterwards.
After attempting (and failing) to fix the warped board, the mask appeared too small to be the centerpiece, so the base was then cut out. Since the arms were not completely even, an extra amount of glue was needed, and left globs everywhere. Other than that, everything went smoothly. Although it took forever to complete, I’m glad I chose to create the clock; I’d never done anything like it before." 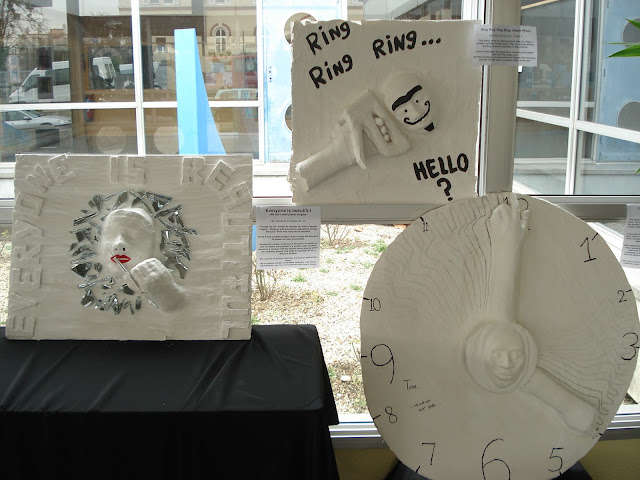 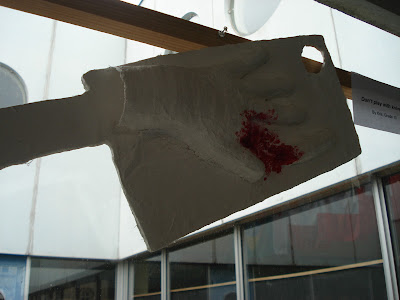 "Through my art I wanted to express my view of plastic surgery. I disagree with any beauty operations, simply because I think that everyone is beautiful.
Since it was a plaster project I tried to keep the structure of plaster as much as possible.
I wanted the phrase ‘everyone is beautiful’’ to stand out and the letters were placed in a certain order so there would be a contrast with the broken mirror pieces which are randomly placed. The knife is supposed to be a doctor’s scalpel. The mask is an actual cast from my face as well as the hand. My sculpture started completely different; with many adjustments I am now more pleased with how it looks."

"Peace in the World!"
"The contrast between the plain black and white represents the simplicity of peace
when we place it next to the hardness of war."
"Brazil, Brazil"
"The project is about how proud we are of our country.
Even though we no longer live there, the hands represent that our hearts are always with Brazil.
There were a few difficulties while doing the project, for example to paint and work with plaster - in our old school we never did art in such ways." 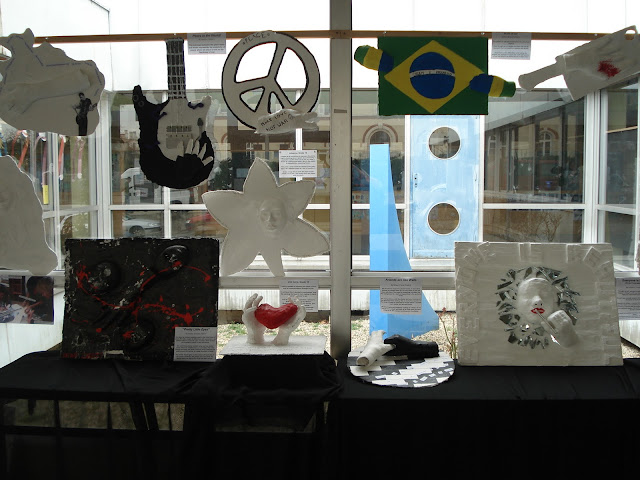 Brings back memories... I used to teach 7th graders and we would mold their faces directly, using the plaster bandage. Over many years, I only had a handful of kids opt out; most kids were ultra-excited by it. We coated faces w/vaseline, covered hair w/shower caps, and everyone brought in their own wash cloth for scrubbing. The results were always unique and phenomenal (we'd add and change and incorporate etc). I don't teach 7th grade any more, and anyhow, everyone nowadays is SO much more sensitive and I'm afraid I'd get into trouble doing this now on kids' faces.

Thanks for sharing your students' beautiful work.

Phyl- great memory! I've done masks directly on students faces only once- during my Student Teaching days a few years ago when I was fearless! It was a Grade 8 class and it went surprisingly well. I don't know if I would try it again, though- maybe with a small class.

wow!! you have a lovely and creative blog. Thanks for sharing your work. Naw I have join in you blog.
I invite you to visite mine blog: http://tallermanualitatsmarta.blogspot.com.es/
thanks!!

Hello! I came across your blog while looking for George Segal-inspired art projects. I realize this post was from a while back, but I wonder if you recall how many yards or rolls of plaster wrap you used per student? I am trying to estimate out quantities for a museum-based project...

Thank you very much for any guidance you can provide!

Hi Amanda, I really don't remember but I would guess that maybe one roll for every 2-3 students depending on how large their sculpture is. Hope that helps!