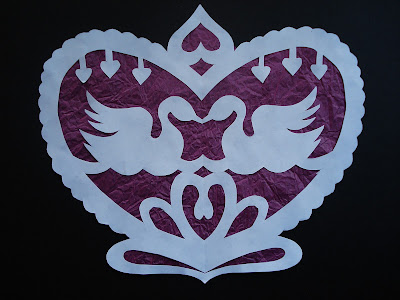 Grade 8 students created intricate cut paper wycinanki (pronounced Vee-chee-non-kee) incorporating a heart theme for Valentine's Day. Wycinanki is a traditional paper-cutting craft from Poland, but it is also practised all over Eastern Europe. It dates from the mid-19th century where it was first made by shepherds who used their huge shearing scissors (as it was the only tools they had available) to create intricate patterns out of leather for decoration. A somewhat similar craft, scherenschnitte, is practised in Germany and Switzerland.

So students looked at examples of wycinaki and scherenschnitte to better understand the style and technique. Typical motifs include animals, birds, flowers, leaves, and trees. We looked primarily at the Kurpie style of wycinanki as it is only one colour. They had to draw a symmetrical paper-cut that included a heart. These were planned on a piece of this folded white paper and had to be designed so they could be easily be cut with only scissors, as I didn't want to have to use x-acto knives for this project.

Here are a couple of great videos about papercutting.

The first is a charming clip from a 1972 Soviet documentary about Vyacheslav Dubinka (1941-2010), a famous Belarusian papercutting artist:

This second video shows the work of contemporary British artist Rob Ryan who is famous for his intricate paper-cuts. I am in awe of his work and would never have the patience it takes to create what he does!

So below is an example of a sketch drawn on one side of a folded sheet of paper. Once the sketch is complete, it helps to shade in the areas you plan on cutting and to double check that everything is attached correctly. 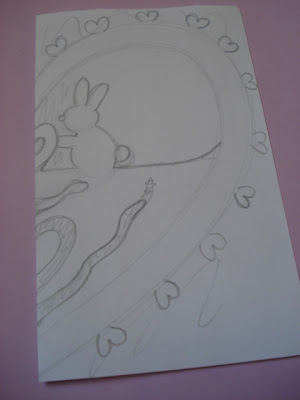 Then cut the shaded parts out. I show my students how to move only the paper and not the scissors, while cutting. It seems to work easier this way. I have a bunch of small scrap-booking scissors I bought from the Dollar store- they help with smaller, more intricate areas. 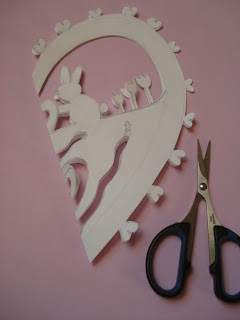 From here students could glue tissue paper to the back- these look pretty hung on a window. Or you can glue them (carefully, with a glue stick or spray glue) to black (very dramatic) or coloured paper. 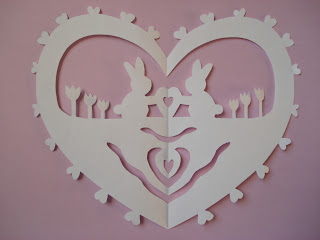 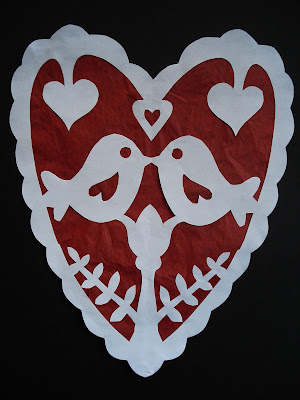 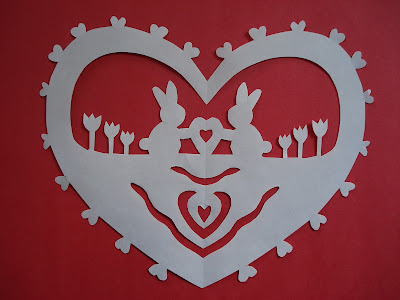 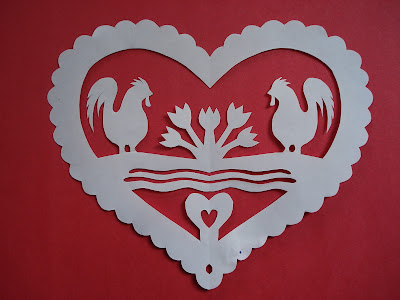 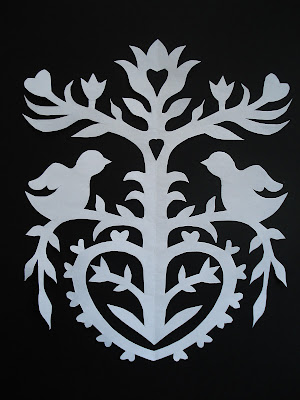 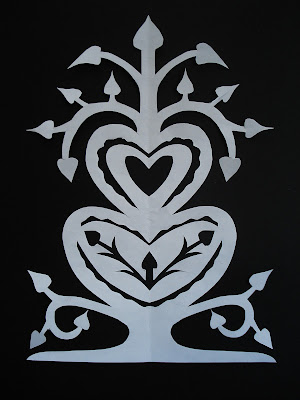 Thanks for the great info! Those videos are sooooo beautiful. Made my day. Will definitely share with my kiddos:)

I love this! Defenitely one I want to try with my 8tth graders :)

I LOVE these and will definitely be trying them with my 4/5's.. hope they can do it!

Your students did such an amazing job with the hearts.

I love the videos.

im in 8 grade myself and have fallen in love with this idea! im the kind of person who cant think of projects to do with inspiration so thank you and all the other people who post projects online. thank you

Thanks so much, Anonymous! I'm like you- I also need inspiration- in the form of a video, tutorial, book, magazine, whatever. Once you have some initial ideas, then you can experiment more make it your own! Thanks for visiting my blog and I hope you try out these wycinankis.