Friedensreich  Hundertwasser (1928 – 2000) was an Austrian architect and painter. I first became aware of his work when I was travelling through Austria and saw his architecture in Vienna- it was so original and unlike anything I have ever seen, though it did remind me a bit of Gaudi's work in terms of outright originality. The vibrancy of his colour, the lack of straight lines and recurring motifs make him a good choice for students of any age to study.

The common themes in his work include bright colours, organic forms, love of nature, individualism, spirals, onion domes, 'lollipop' style trees, windows of different shapes and sizes and rejecting straight lines. He called straight lines "the devil's tools" and considered them 'ungodly'. He also disliked the monotany of the colour grey saying "Colourfulness, variety and diversity are by all means better than the grey, the average grey."

Although Hundertwasser first became well-known for his boldly-coloured paintings, he is more widely known for his individual architectural designs. ﻿﻿﻿﻿﻿Ecology and fantasy were very important in his works and he created his buildings in a way that nature and human beings could live together, including having live trees in and on the rooftops of his buildings.
﻿


I was inspired by the art lesson found on this New Zealand art education website.
(Hundertwasser is very popular in New Zealand as he made it his second home for 25 years.)

I first showed my Grade 7 students a slideshow of his work and posted pictures from my calendar on the whiteboard for them to refer to. We discussed the characteristics of his work and had a really good discussion about the differences of his unique, individualistic buildings as opposed to the houses they generally live in (in the suburbs, for the most part), where building codes are strictly monitored as well as our 'safe', standard buildings found in the city core downtown. 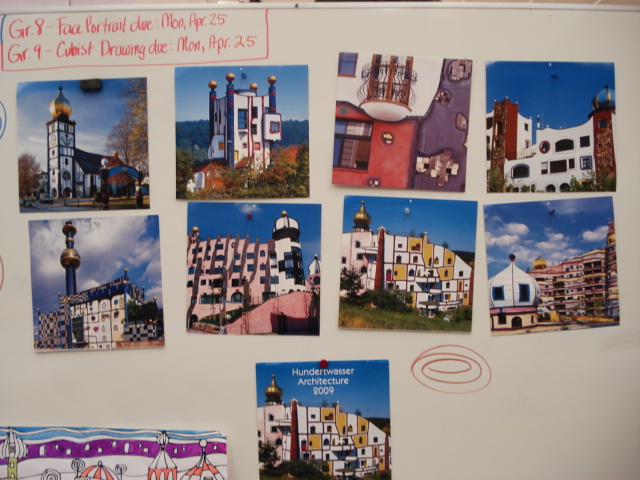 Then students sketched out ideas for their own Hundertwasser-style houses in their sketchbooks. They had to include a number of Hundertwasser's typical architectural elements but were also encouraged to add their own ideas and make the houses fantasy-like. 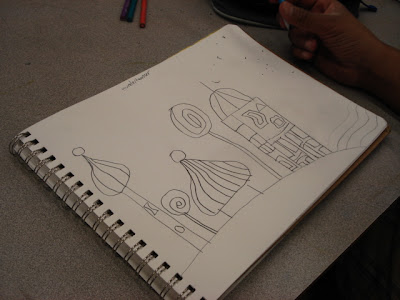 They drew their good copies on long, thin, horizontal sheets of heavy white paper.
EDIT: a few people have asked about the specific paper size. I cut up sheets of poster paper
(22 x 28 inches) into strips- I got 4 strips per sheet, so they're about 7" x 22" each.
Watercolour paper would yield even better results, if you can afford it. 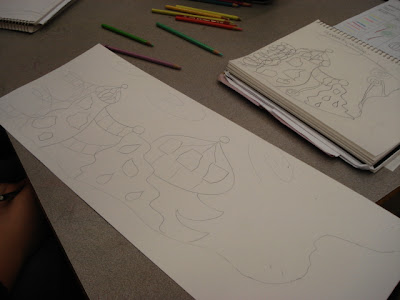 I mixed up a bottle of 'black glue' (glue mixed with black India ink or black acrylic paint) and distributed it into small containers. I found these great plastic mini containers at the dollar store that come with lids, so the glue stayed in these from week to week without drying out. If the black glue thickens up, just add a bit of water and mix.

EDIT: some people have found that black ink mixed with white glue doesn't work. It might depend on the ink brand. Try mixing black acrylic paint with some white glue, or simply just slightly watering down some acrylic paint. Basically, you're looking for a black waterproof material, so when you paint later with the watercolours, the black lines to 'bleed'.  As always, it's best to test your materials ahead of time before you teach the lesson.

For a shortcut, simply use Sharpies. You just won't get the organic line quality. 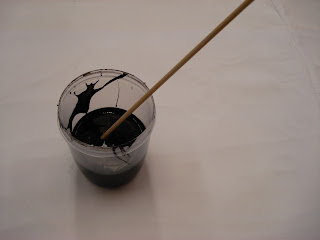 Students used bamboo sticks (skewers) (I buy the big bags from the Dollar Store)
to draw the black glue over all their pencil lines.
I'm not going to lie - this took a while (2- 80 minute classes depending on the complexity of the design). You will get some kids saying "this takes soooo looong". At least my Gr5ade 7's and 8's did! That's when I lecture them on instant gratification, haha.
You get a really nice irregular line using this technique. If you're in a time crunch, students could simply use black permanent markers for this step. 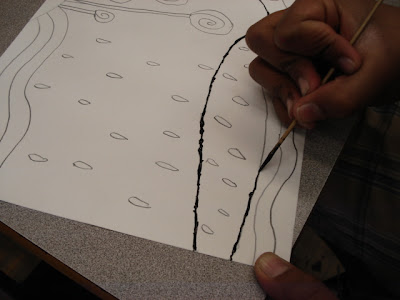 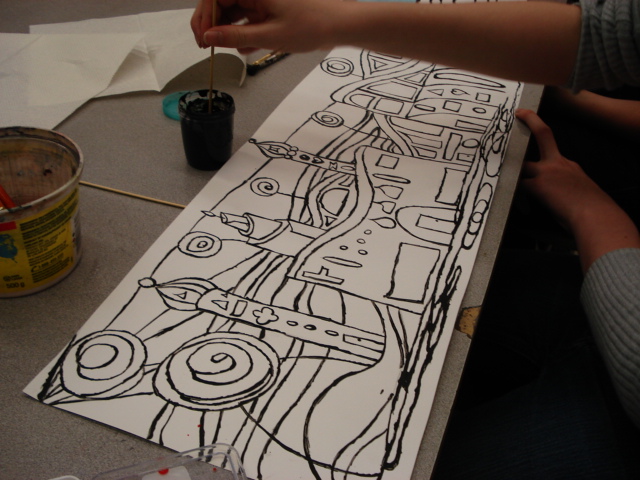 Then we painted them with watercolours- students loved this part. We used Prang watercolours, but liquid watercolours would be even more vibrant. Some students painted their onion domes with gold paint and others glued on aluminium foil for a silver effect in some of the windows.
The possibilities for embellishments are endless with this project. 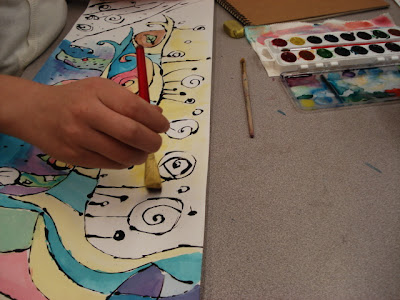 Here's a close-up which nicely illustrates the wavy, organic line you can achieve
using the bamboo stick and black glue. 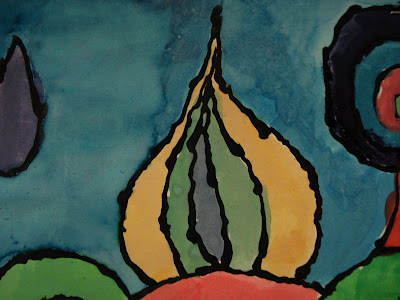 These are wonderful. I love how you had the kids use a long piece of paper for the composition. I am teaching about Hundertwasser right now. Thanks for more inspiration!

An excellent lesson to teach students about composition. Also the variety of lines for this project is amazing. Like Kristyn I love the long long paper for this project.
The display board looks fantastic.

Thanks all! This is one of my most favourite lessons to teach and all students get great results, as the drawings can be so stylized.

These are really wonderful! I love how bright and crisp they turned out!

Oooo....I just love these! What a great take on Hundertwasser. The long horizontal format and the lines created with bamboo sticks and black glue add so much impact to these. Beautiful work!

Just gorgeous - love the unique quality of the glue line. Thank you for the background and link on the artist too!

These are spectacular!! wow!

You asked about the tooling foil for my African masks - we use 36 gauge foil and it can be purchased in rolls of various lengths, depending where you get it. The rolls are 12" wide. I've ordered it through either Sax/School Specialty, or Nasco Arts and Crafts, but I think you'd also find it at Blick or other similar providers.

We are doing some work inspired from Hunderwasser in my Art class, but we made appliques, and now we are silk painting, using gutta and dies. But I think my teacher might have been using your idea! I love the display, they are really filled with colour and life. Just like Hunderwasser's work!

Hi there... You've been walloped by the wand of the Art Fairy!(again) I loved this tutorial so much that it made the Weekly Top Twenty at the Art Fairy. Stop by an pick up a button if you get a chance.

Oh, just gorgeous!!!! I love your ideas, the medium, the kooky lines. What age group was this?

Thanks all! These definitely took a few classes to finish but it was worth it.

Paula, to answer your questions- this was a Grade 7 class, so that would make them 12-13 years old.

I did this lesson with my grade 7 art class and they absolutely LOVED it! Their paintings were so vibrant and beautiful. Thanks for sharing this idea!

Aimee- I'm glad your kids liked it! Post a link if you have blogged the results.

Thank you so much! We were googling "lollipop trees" - my 5 year old asked me if I had heard about Mr. Hundertwasser and his painting, so...there it is! Many thanks.

Barbi, that's amazing that your 5-year old knew about Hundertwasser! Did s/he learn about him in school? Too cute.

I love this lesson but how much glue and ink did you mix together?

Mrs. Paul- I basically just added some black ink a bit at a time, stirred it up until it was dark grey and tested it on a sheet of paper so see how it looked when dry. (it will look dark grey when wet but dries black)
You can also use black tempera or acrylic paint as well; I've heard some teachers use a ratio of half glue to half black paint.
Good luck!

I just discovered your fabulous lesson. Thanks as always for posting reference photos, especially the architecture shots. Results are absolutely beautiful - I would love to try this on a smaller scale.

So amazing. I love how these turned out. Thanks so much for sharing. Can't wait to try this lesson!

Thanks so much Rina and Patty!

This is great! I have to teach a lesson based on Hundertwasser and his unique style in my after school art class. They are a bit younger (2nd grade) so I won't make this as complex but these are great ideas to get me started on the lesson plan. Thanks a lot! Hope ours come out this good!

Thanks for your comment Joanna- Grade 2 can definitely do this, but simpler, like you said. Good luck and I know they will love it!

Thanks for inspiration; I am trying this now with beginning high school class. I found black acrylic worked better with the glue than the ink; the ink was causing the glue to goop up (might be the type of ink I have... Speedball India ink).


Very interesting!I was an Art Teacher for 38 years...I wish I had the oportunity to see this video there...Hundertwasser was a very free spirit and a poet-arquitect...:))

Andrea: thanks for your comment. I'm glad black acrylic worked for you- I don't remember what brand of India ink we used, but it definitely wasn't Speedball. Interesting how different brands react differently.

Maria: thanks for your comment! I love the term "poet-architect"- SO true!

I have used India ink with kebab sticks often. I will try using black PVA because your results are very impressive, thanks for blogging.

Love these!! What size paper did you use?

Anonymous: I cut up poster paper into strips so they ended up being 7" x 22" each. I got 4 strips per one sheet of poster paper.

Love Hundrtwasser, love this activity using the ink ank satay sticks. You certainly get an interesting line quality. I've done this sort of thing with much younger kids too. They come up with such imaginative buildings.

Thanks for posting this lesson. I like it very much and will refer to it for my 2nd-grade unit on communities. Have a good day.